The a.d.online website was transferred to new servers on 23 June 2007.

This was a big weekend in the life of a.d.online – the entire website was relocated from the USA to Australia. What am I talking about, you ask? Web hosts, of course! 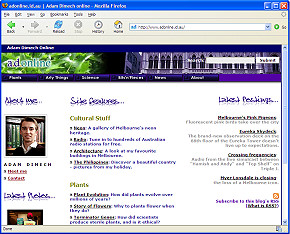 I have been running this website since July 1998. In that time I have moved on from from a “look at me, I have a website” website (as was the novelty in those days) to progressively building up the site’s content to create something useful that people can enjoy.

Initially the website was hosted on Tripod– a free web host that was all the rage long before MySpace was invented.

But as my website, and my ambitions for it grew, I eventually decided to go “professional” and get a domain and paid web hosting. In 2003, I registered the domain www.adonline.id.au and my website was transferred to Kangaweb on US-based servers. And there it stayed until this weekend.

I plan to roll out some new features in the coming months. As I was researching the requirements for these new components, I realised that my current hosting arrangements couldn’t support what I had in mind. So it was once again time to move house.

After careful consideration, I settled on a local company called Jumba. Jumba operates Australian-based web servers, which means for visitors from Australia and South-East Asia, the website may load a bit faster than it used to.

However, for most visitors there will be no immediate difference in the website. The design is the same, the URL is the same and the features are all the same for now. As the site is expanded in coming months, I will hopefully deliver a range of improved services and content that you will find enjoyable. Until then, it’s business-as-usual.

And how was the move? Fairly straightforward to be honest.

Nearly everything travelled across without a glitch and the change in DNS records was impressively fast.

The only real drama was the Australian Radio Online website, which was using a particular PHP script to serve media content. This didn’t function on my new server, so I had to implement a new delivery system that took about two hours of fiddling-with to correct. As this is the most popular part of my website, it was an immediate priority.

The only other problem was a minor and peculiar one…. the images from just one News Desk post didn’t make the journey. Replacements were quickly uploaded, so no dramas there.

If you notice any problems or faults with any parts of this website, feel free to contact me via the Feedback Form. Otherwise I look forward to bringing you a progressively richer website in the coming months.