Book Review: A History of the Crusades

There is surely no greater folly committed by Western Europe than the Crusades of the twelfth century; a toxic mix of economic expansionism and religious zealotry.

It is a curious thing that in this age when ‘political correctness’ is so much at the forefront of our minds the term crusade is still routinely used in a positive context to colloquially describe a person’s desire to fight a cause that is just and right against some sort of enemy. Looking at the last few Australian Prime Ministers for example, we’ve had Malcolm Turnbull figuratively launch a crusade against Japanese whaling, Tony Abbott launch a crusade against the ABC, Julia Gillard launch a crusade for education and Kevin Rudd fight a crusade against homelessness.

Of course the real crusades were far more complex than these modern concerns, but it shows just how ingrained the concept of crusade is in Western thinking. Seven hundred years after the event, we are still using that potent term to describe perceived struggles for good. Aside from questioning the appropriateness of crusade in this context, we should also ask ourselves whether the crusades were ever good in the first instance? Our Islamic brothers and sisters would argue not, and perhaps after reading Steven Runciman’s three-volume A History of the Crusades, other readers also come to the very same conclusion. 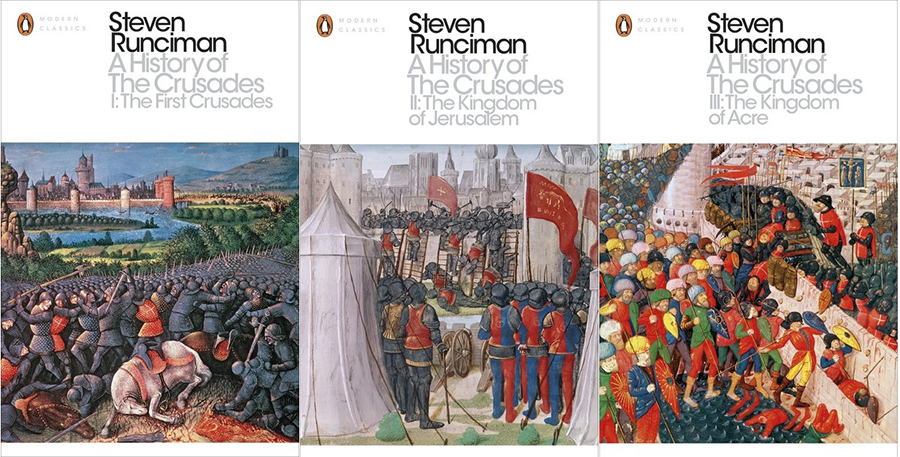 The First Crusade (1095–1099) was launched by Pope Urban II at the Council of Clermont in 1095 with the aim of recapturing the Holy Land from the Muslim ‘infidels’. After the Byzantine (Eastern) emperor requested military help from the West for lands recently lost in Anatolia to the Seljuq Turks, Pope Urban II called for an expedition to aid the capital of Eastern Christendom. Pope Urban’s call was widely heeded and before long, massive but somewhat unruly armies were assembling across Europe, composed of knights, nobles, clergy and peasants. Whist the aim had always been for the papacy to maintain control of the Crusades on behalf of the Church, the pontiff quickly became alarmed at the conduct of these rag-tag armies and the clergy effectively lost control of the hordes. As an inducement to particpate, the Pope had promised absolution for all sins to anyone who fought the Crusade, thus ensuring that hundreds of thousands of Christians would ‘take the Cross’. Of course, many also decided to join for reasons temporal rather than spiritual.

As the armies slowly made their way to Byzantium from the West, the rabble became unwieldy and resorted to pillaging the countryside, thieving and attacking the locals along the way, even in Christian lands. The Hungarians, in whose land the Crusaders had to pass, became increasingly frustrated with the suffering their people endured whilst the Crusaders travelled through. Even the Byzantines were wary of the marauders and were keen to move them along as soon as they could.

Men were eager to “fight the infidel” and have their sins absolved. There was often little discipline, especially when peasants (including the elderly, women and children) vastly outnumbered knights. It really was a miracle that the First Crusade succeeded at all, but it did mostly on account of surprise and then reputation. The Islamic nations were bitterly divided in the eleventh century and none expected such massive Christian armies to suddenly cross their frontiers and attack their towns. Lead by Frankish soldiers, who were brave fighters, the Crusaders quickly became feared by the Muslims whose weaponry was inferior. As the Crusaders’ reputation spread through the middle-east, they increasingly found that the Muslims would abandon their settlements rather than suffer slaughter.

Despite several centuries of Islamic rule, it was often the case that Christians outnumbered Muslims in the majority of middle-eastern settlements. To varying degrees, Christianity was not only tolerated by Islam but Christians were often an essential part of any Islamic court. Many native Christians were Orthodox, but there were also heretic Armenians and Nestorians. Unfortunately the Latin Christians of the West showed considerable intolerance to these native sects and many believers discovered that their lives were more peaceful under Islamic rule (where the Muslim authorities applied a tax but otherwise tended to leave them alone) rather than under Frankish rule, where their practices and doctrine were constantly under attack. This would, in part, unravel the Crusader movement later on.

As the Franks took control of Armenia and then moved down to modern-day Israel, Lebanon and Syria, they established capitals at Antioch, Tripoli, Edessa and finally Jerusalem. The conquest of Jerusalem was especially horrific, even by medieval standards.

Runciman’s book details the struggles, the battles, the heroism and the barbarianism of the Crusades, starting with the context of their establishment and then moving through each part of the story in sequence. His sources are prolific, relying on both Arabic and Western accounts to build his narrative. His writing style is fluid and makes for easy reading. His first volume deals solely with the First Crusade and the establishment of the Crusader States (Outremer), whilst his second book details the establishment of the Kingdom of Jerusalem. The third volume, entitled ‘The Kingdom of Acre’, details the stagnation and then the decline of Outremer as Arab Islam found a common voice and a sufficient military strength to fight back and reconquer its former lands.

Runciman provides a solid linear narrative about the crusades but also delves into other aspects of medieval society to paint a comprehensive picture of medieval relations between East and West, Christendom and Islam. We learn of the struggles  that the Franks had to ensure just to survive in the Middle-East and how it became necessary to come to terms with their Islamic neighbours just to survive. Yet their frustrations were brought to bear each time a new wave of crusaders moved down from Europe; their zealotry would undo any reconciliation that the Franks had made with the Arabs.

We also learn about the military orders of the Church who became the most reliable and capable military force in Outremer but answerable to no secular power, just the pope. Kings could only ask for their co-operation but never give them commands as they became a law unto themselves. The apparent contradiction of the Knights Templar fighting the ‘infidel’ whilst providing them with banking services is extraordinary.

The crusades are not just a story of religion, but warefare, politics, economics and diplomacy. Runciman’s honest account of the crusades will undoubtedly trigger personal reflection about the tragic waste of life and the destruction of civilisation that was represented by this awful episode in human history.

A History of the Crusades (Parts I, II and III) is published by Penguin.