The messy leadership crisis in Canberra has done untold damage to the reputation of Australia’s parliament.

The leadership crisis in Canberra is one of the messiest Australia has ever seen. Our nation’s reputation for removing first-term Prime Ministers has become legendary in the last decade, providing confronting evidence that too many of our politicians are focussed on factionalism and self-interest over the interests of the nation.

In 2010, first-term Labor PM Kevin Rudd was ‘knifed’ by Julia Gillard on the basis that Rudd had become too unpopular amongst the electorate for abandoning strong policies on climate change. Within months, Ms. Gillard struggled with the role of prime minister and almost lead the ALP to a loss in 2010; many feeling aggrieved by the apparent injustice of Mr. Rudd’s removal. With ongoing malcontent amongst voters, the tables were then turned and Ms. Gillard was under attack with a string of ministerial resignations. A struggling Gillard then announced an extraordinary 8-month election campaign but Mr. Rudd returned before the election was called in an attempt to “save the furniture”. Utterly fed up with the chaos, the voters removed the ALP from office and elected the Liberals under Tony Abbott.

At this point, a reasonable person would have thought that the lesson of the leadership merry-go-ground in the ALP would have been learnt by all. The ALP changed its leadership rules in response to the chaos but the Liberal Party had the advantage of being a bystander. Alas, no.

After just two years as Prime Minister, Mr. Abbott was removed in a party room coup lead by Malcolm Turnbull. Not content to repeat the mistakes of the ALP once, Mr. Turnbull then called a double-dissolution election in 2016 and almost lost office, securing a second term of government with a majority of 1.

As it turned out, the factional Right within the Liberal Party was not happy with Mr. Turnbull’s prime ministership and decided to challenge him earlier this week. Mr. Turnbull survived the challenge from arch-conservative Peter Dutton only to have his leadership effectively destroyed two days later.

When the Australian Labor Party allowed its MPs to engage in factionalism and personality politics whilst obsessing with opinion poll results, this resulted in the loss of credibility and ultimately government. Now the Liberal Party have done the very same thing.

No Respect for the People

Internal leadership challenges will happen from time-to-time; that’s a part of human nature. However never in Australia’s political history has been allowed to interfere so much with the operation of government. Yesterday’s decision to adjourn the sitting of the House of Representatives was an unprecedented interference with democracy.

The Liberal Party is being ripped apart by factionalism with ‘dry’ hard-line conservatives on one side and ‘wet’ moderates on the other. The party has always been described as a “broad church” by it’s leaders who have had to balance this competitive tension, but this recent outbreak of civil war looks like it will be very damaging indeed. Some are asking whether the Liberal Party will ever recover? Time will tell.

The problem is that the Liberal Party MPs have become so distracted by this internal power struggle that they have lost sight of their purpose and indeed taken their eye of their primary responsibility to govern. Rightly, many Australians are angry about the pettiness and the lack of direction. 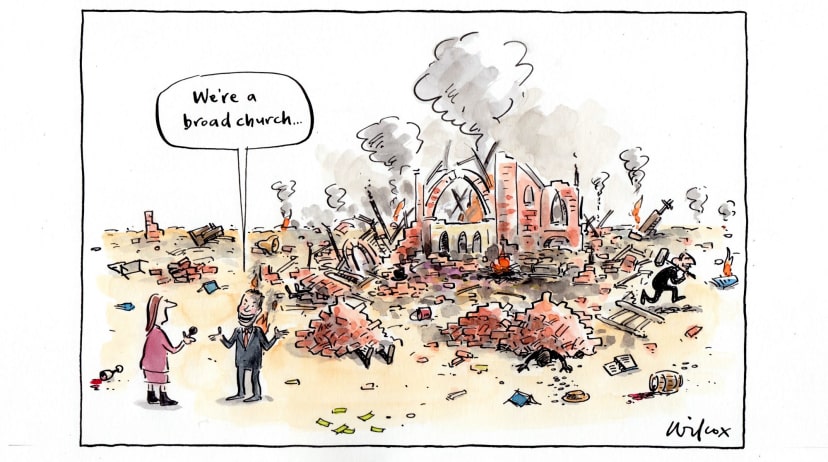 The Liberal Party is often described as a “broad church”. Cartoon by Cathy Wilcox, reproduced with permission.

The other problem is the very messy nature of this power struggle. How was it possible that Malcolm Turnbull was able to get support within his party room for his National Energy Guarantee on Tuesday and then have to call it off a week later? How was it possible that a Liberal party room meeting was called where Mr. Turnbull won the vote, only to be torn down two days later in another challenge? Clearly, current members of the Liberal Party don’t even respect their own internal rules.

Adding additional complexity to this mess were questions about Mr. Dutton’s eligibility to sit in the Parliament, let alone be Prime Minister, although the Solicitor-General has provided advice that clears Mr. Dutton for now.

Mr. Turnbull announced that he would not call another party room meeting unless he was presented with a petition containing the 43 signatures required to topple his leadership. If the petition was presented, he indicated that he’d not only stand aside but would resign from parliament. In a parliament where the government has a majority of 1, this could be the undoing of the government entirely. Mr. Turnbull put a gun to the head of his opponents.

In the end, this wasn’t even a contest between Mr. Dutton and Mr. Turnbull. Social Services minister Scott Morrison and deputy PM Julie Bishop announced that they would run in this absurd 3-way contest for the poisoned chalice.

Peter Dutton represents the far-right of his party. He’s deeply conservative both socially and economically. He walked out on The Apology. He sees the xenophobic One Nation and Katter’s Australian Parties as the primary threats to the Liberal Party, eroding “the base”. It is fair to say that Mr. Dutton’s extreme brand of dry conservatism is not widely popular, especially in more liberal states such as Victoria and South Australia. In a nation with compulsory voting, such extreme politics is unlikely ever to lead the Liberal Party to victory at the ballot box. To believe otherwise is simply delusional.

Mr. Dutton is also relatively unknown in the electorate. He is most famous for implementing harsh policies towards refugees locked-up in Australia’s offshore detention centres in Papua New Guinea and Nauru. He distinctly lacks the inclusive, warm and intellectual qualities normally required of a national leader. According to Guardian columnist David Marr:

The assumption that (Dutton is) a potent adversary of his party’s enemies in Queensland looks very shaky in the light of focus groups of undecided voters held in the last few days in his seat of Dickson. He’s no hero to them. They haven’t forgotten – as Canberra strangely has in the turmoil of the last few days – that Dutton made his reputation imprisoning women and children out in the islands. These voters want the boats stopped but they reckon their MP is heartless, cruel and not very bright. David Marr, The Guardian, 24 August 2018

In the end, the victor was Scott Morrison with moderate Josh Frydenberg as deputy. True to word, Malcolm Turnbull has announced that he’ll soon resign from parliament and a by-election will be held in his seat of Wentworth (NSW).

On the way out, he took aim at Mr. Dutton and Mr. Turnbull:

Peter Dutton and Tony Abbott and others, who chose to deliberately attack the government from within, they did so because they wanted to bring the government down. Malcolm Turnbull, 24 August 2018

He also reminded the public:

We must never allow the politics of race or division or of setting Australians against each other to become part of our political culture. We have so much going for us in this country. Malcolm Turnbull, 24 August 2018

It now remains to be seen what Scott Morrison can do with this ruinous mess. Mr. Morrison has indicated that an election will not be held soon. He’ll need as much time as he can get to restore public faith in his government.

An unfortunate symptom of the events of the past few days is the conclusion by many that “the system is broken”. This oft-quoted catchphrase is parroted a lot, but without due cause. For whilst the Liberal Party may be tearing itself apart at the moment, our parliament and our democracy continue to function.

One of the most important requirements of the Australian democracy and our constitutional monarchy is that it facilitates the smooth transfer of power without the spilling of blood or an outbreak of violence. All the checks and balances are working fine; the systems and conventions are all in place to enable government and society to continue through this episode.

There’s no disputing the disruptive nature of these events, but “the system” isn’t broken. It’s just been a little strained these past few days.